Once I had your answer, I travelled to the centre of the island. As I neared the centre the light took on a flickering quality and bathed the palm trees around me in a rainbow of colours: First purple, then green, then blue… As I drew nearer, I realized that the flickering light and changing colours were coming from a huge bonfire that must have been 7 feet tall! Sitting calmly next to the bonfire was the witch doctor,watching as the flames changed colour. I squinted to see better and gasped as I realized that he was controlling the fire with his hands! He noticed me watching and beckoned me over to stand next to him. 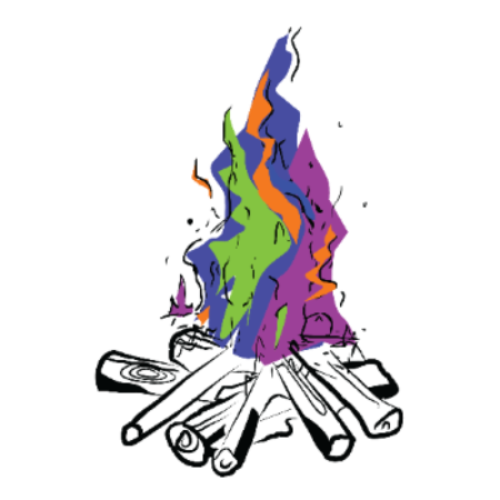 He smiled and with a flick of his wrist turned the fire to a bright green then let it fade away to a cool blue. Once I was close enough he spoke in a clear but quiet voice “Hold the medallion and speak the phrase, if you are correct you will see red in the blaze” and gestured towards the giant fire. I gulped, and held up the medallion tightly in my shaking hand. With a deep breath I called out "CARPE NOCTEM" and the fire roared and turned a bright, blazing red! As the fire changed colour it grew even bigger, seeming to reach all the way to the sky. The medallion jerked free of my hand and flew into the fire. I gasped and made as if to try and grab ahold of it again, but the witch doctor motioned calmly to me to let it go. We stared into the fire as it slowly changed shape and began to form clear shadows against the trees. The shadows flowed and merged until they became a silhouette of the Ghost Ship, sailing off into the distance before disappearing completely as the fire went out in the wind.

I looked at where the fire had been roaring seconds ago, and noticed the medallion laying in the center of the pit, shining brightly against the dull grey of the ashes. The witch doctor smiled and said “Congratulations Zamira, you have lifted the curse that has haunted these islands for years. You have helped me, and your brothers and sisters of the Hidden Isles greatly. Thank you.” He held out his hand and placed it on my temporary tattoo, it began to burn slightly and I realized that he was making the tattoo permanent! He lifted his hand and said “this means that you are trustworthy, and strong. With this tattoo you can go anywhere on the Hidden Isles and be welcomed like it is your home.” I sighed with relief, honoured to know that they had taken me in as one of their own, but I knew that all I wanted to do was go back home to Palila. 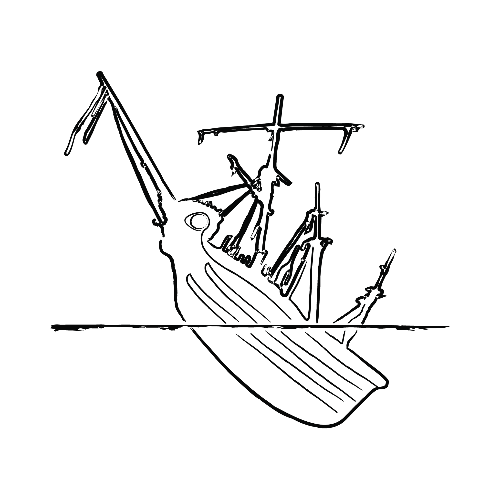 I turned to leave, then hesitated and turned back to the witch doctor to ask “But what of the Ghost Ship and Captain Crimson Black? What has happened to them now that the curse is lifted?” The witch doctor smiled and beckoned for me to follow him and he walked towards the shoreline. When the water came into view I saw a large shape and after a few seconds I realized that it was the Ghost Ship, but not as I had seen it before. It leaned at an odd angle, slowly becoming smaller as it disappeared underwater. It was sinking! Water poured into the holes that had been ripped into the hull of the ship as it sank deeper into the ocean surrounding the Hidden Isles.

I looked up at the witch doctor in sadly: as terrible as Captain Crimson Black was, I didn’t want anyone to be hurt! The witch doctor realized I was upset and placed a gentle hand on my shoulder “Captain Crimson Black has been haunting the Hidden Isles for many years, but did you notice that he has never aged? The real Captain Black disappeared at sea many moons ago, the only reason his ghost could not leave the Hidden Isles was because of the cursed medallions. When you lifted the curse, you also set Captain Black’s spirit free. You should be happy to know that, thanks to you, he can finally rest in peace.”

The witch doctor helped me collect my things and watched as I sailed away on my raft, gliding through calm water. As I left, I could sense the peace that settled over the surrounding islands that had been haunted so long by Captain Black.

Thanks to you I was able to solve this mystery and saved the Hidden Isles! Next time a mystery arises you’ll be the first person I ask for help! I hope you’ll be there to help guide my way!