It looks like your investigative skills have really paid off! It turns out that, not only was Matthew Carroll the Hooded Figure, he was also hiding a much larger secret. It’s something we can barely believe ourselves but it explains why he was stealing other people’s clothes.

Once I received your message about who you thought the suspect was, I wasted no time in tracking him down. My first stop was his parents’ house, which was just south of the Wailing Caves on Pine Ave. When I introduced myself to Mr. and Mrs. Carroll, I could tell right away that something was off. It was like they had been waiting for someone to show up and now that person finally had. I wasn’t there for more than a minute when Mrs. Carroll broke down crying telling me about how her only son Matthew had been acting strangely. When I pushed her on what she meant by strangely, she only said that he had been leaving in the middle of the night and would come back in the morning dressed in other people’s clothes. When he would show up the next day he seemed to not know what happened. They begged me to help them. To help their son.

After a few more minutes of talking with them, I decided to head out and make my way to where they thought their son was currently hiding. They thought he was in the forest North East of town, close to the Wailing Caves. I was hesitant to go at first because it was starting to get dark out, but I couldn’t help myself now that I was so close to solving the mystery. It wasn’t 20 minutes later that I spotted Matthew at the edge of the forest looking tired and ragged. When I called his name, his head snapped around and he looked ready to run but stopped when he noticed I was just a kid.

After a few moments of unbearable silence, he asked what I was doing there. I had no reason to lie, so I told him the whole story from beginning to end, including how you had helped me figure out that he was the one stealing clothes and how worried his parents were. His shoulders drooped more and more as I spoke until it was almost as if he was ready to disappear into himself. He looked at me sadly, telling me how sorry he was and how he had no idea what was happening during the nights he was disappearing -- only that he would wake up wearing other people’s clothes. He only knew that something terrible had been happening to him ever since he was a child. Something he could not control or explain. He didn’t even know why it was happening. That’s why he would come out to the forest, to try to get far away before The Change happened. 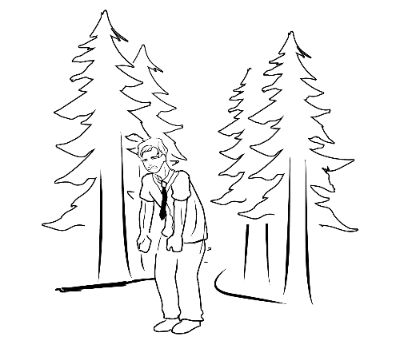 I was about to ask what The Change was when I had my answer given to me. Before my eyes, I saw this plain looking man change into a large dog. As hands became paws and face became elongated, clothes began ripping this way and that. (No wonder he was stealing clothes!) I stood frozen with shock and fear, rooted to the ground. I didn’t know what was going to happen next or if he was going to attack me. But for the life of me, I couldn't make my feet move! When the transformation was done, a large shaggy-haired dog stood before me. His breath came in short, heavy snorts and his body quivered as if he was about to leap at me. I made myself look at his face. He didn’t growl or make a sound other than the breaths coming from deep within him. He simply looked at me with his sad canine eyes and after a moment, turned and ran into the forest.

I don’t know how long I stood there after he was gone. I mean, I had watched enough movies to know what a shape shifter is, but to see something like this in real life?! Who was ever going to believe me? I wish I could tell you that we brought the “Hooded Figure” to justice. But my gut tells me that Matthew - both the man AND the dog - isn’t dangerous. I don’t think he wanted to turn into a dog any more than people wanted their clothes stolen. But because he was so confused after the transformation, he had no choice but to try and get some clothes however he could. And it didn’t help that he couldn’t remember what had happened after the fact. Maybe I’ll put some goodwill clothes around town so that if he ever needs some new clothes he’ll have options aside from stealing. And maybe, just maybe, I’ll keep an eye out for Matthew as best as I can. Someone needs to help him when The Change takes over him.